I've committed a dreadful crime.
I didn't mean to. It was accidental.

It happened after the return of my errant water supply. I was so bewitched by the miracle of water-on-tap that I succumbed to a cleaning urge (always a bad idea). And now I think I've seriously blighted the breeding prospects of an innocent bystander. He's probably out there right now negotiating divorce proceedings.

After washing the dishes and scouring the kitchen, I thought I'd tackle the cats' litter tray (my, this is a gripping story). I carted two-litres of soggy clay and unpleasant chunky bits outside and - as usual - tossed it into the dense undergrowth beyond my back garden wall. Unfortunately, the vegetation was inhabited. As the reeking litter rained down, a very startled grey duiker shot out of the bushes. He stared at me a moment, nostrils distended, before leaping away in jinking flight.

Now being showered with a kilogram of used cat litter mightn't seem that bad (it's not life-threatening, after all). But you aren't a duiker (I assume). Duikers are knee-high antelope that creep about in thick vegetation. And scent is their all-important mode of communication. 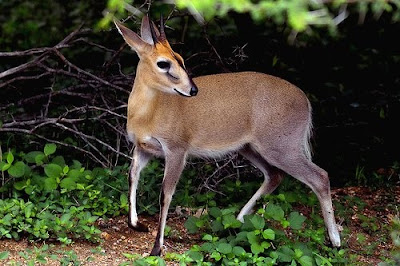 Grey (or common) duikers (Sylvicapra grimmia) are a veritable treasure trove of scent glands. They've got them between their toes, in their groin and in slits beneath their eyes. These 'preorbital' glands consist of three different secretory layers which ooze a sticky, black concoction. Photo by A Meintjes.

Duikers live in monogamous pairs, and they smear their smelly secretions on trees and bushes to mark out their territory. But, more importantly, aromatherapy is a vital part of duiker courtship. During the final stages of foreplay, the couple presses their preorbital glands together, first on one side and then the other, which releases a heady rush of scent. So what's going to happen when my victim rocks up to the marital shrubbery reeking of cat pee? Grey duikers breed all year round (unlike the other antelope species here) so I'm hoping his spouse is already in the family way, and my vile misdemeanour won't diminish duiker numbers. 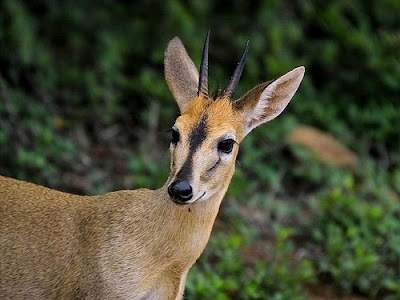 Male grey duikers (who wear the horns) come at a run if their offspring utter distress bleats. He and his spouse will not only attack small predators, they'll butt large male baboons and three-metre-long pythons. Photo by A Meintjes.

So how did yesterday's calamity happen? One or two duikers often skulk in the undergrowth below my back garden, nibbling on flowers and seeds, sniffing out fallen fruits and snacking on carefully selected leaves. They like to poke about beneath the trees when the vervet monkeys are foraging above, retrieving any goodies that the monkeys let fall. I'm always amazed to see my dogs (who chase anything that moves) just sitting calmly watching the duikers walk past. The little antelopes adopt a strange erratic gait: they take half a tentative step, freeze for a second with hoof upraised, complete the step, freeze again, and so on. You've probably seen footage of chameleons moving in just this way. These broken, jerky movements don't seem to trigger the dogs' 'chase' instinct, and I've vowed, that if I'm ever confronted by a large carnivore, I'll give it a try.

Duikers also have another trick, which was the cause of yesterday's accident. If a duiker thinks it hasn't been spotted, it sinks gently down to the ground, in one fluid movement reminiscent of a curtseying courtier. Regardless of how often I see this, I'm always shocked; one just doesn't expect a small, flighty animal to lie down in the face of danger. I can't stop myself wondering if they're closet narcoleptics. So yesterday's duiker was actually lying in the vegetation at my feet, cryptically waiting to be showered with cat excrement. 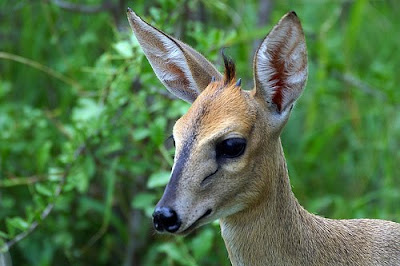 Butter wouldn't melt in his mouth? Don't be fooled. Grey duikers happily munch carrion, and stalk and kill birds and mice. Photo by A Meintjes