﻿﻿
Last Wednesday was an evening for unexpected visitors.

I was alerted to my first caller by the dogs. I could tell that they weren't just indulging in their usual nightly spat with the porcupine: they sounded threatened.

Dashing outside, to drag them away from whoever might be about to do them in, I wondered whether I'd run headlong into a leopard (they're forever leaving their paw prints round about). But what I discovered was the back half of a very large African rock python (Python sebae) disappearing into my outside bathroom. The dogs were too afraid to attack (ahh, thank goodness for the salutary effects of an eyeful of cobra venom), but were creeping after it, hackles raised and necks outstretched. Wobbly Cat was standing nearby looking like a feather duster who'd suffered electric shock therapy.

The python, hissing stridently (I've never heard a snake actually hiss before), slithered in among the boxes and paraphernalia I store in this unused bathroom, before wrapping itself around the sink plumbing. At around 2.5 - 3 metres (7-9 ft), it wasn't as big as the one that plagued us last summer, but it'd still see my cats as nothing more than appetite-piquing hors d'oeuvres. 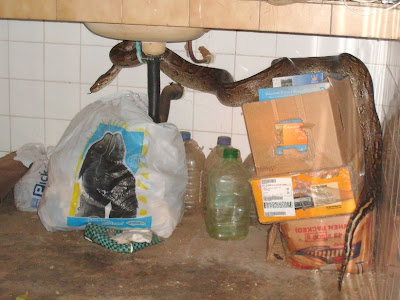 I quickly bundled the pets into the house, to prevent any mishaps, and left the snake to entertain itself amongst my worldly goods. 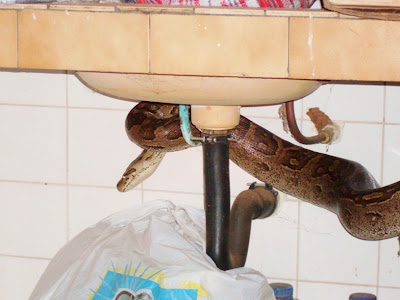 I'd no sooner got all the animals safely shut in the house, than I turned round to see Wobbly staring transfixed at something under the dining table.

After a scuffle, I managed to drag, shove or carry everyone (except the snake) into my bedroom and squeeze shut the door. Step one complete. I then fetched my tried-and-true snake removal equipment: the kitchen broom and a poster mailing tube.

Well, at least this one was small. In fact, it was only around 0.5 metres (1.5 ft) long, strangely two-toned (glistening black above and white below) and entirely new to me. With great presence of mind (something I tend to relinquish in the presence of snakes), I snapped a couple of blurry photos as it coiled and uncoiled nervously on the concrete floor. Actually, it looked pretty innocuous; after all, it wasn't hissing or puffing, spitting or threatening to strike. In fact, when I got a bit closer I realised that what I'd assumed was its head, upraised and ready in defence, was actually its stumpy tail (as you can see in the photo). It had tucked its head safely away undercover. Aww, the poor little creature; I could almost see it covering its eyes with its hands and trying to be invisible.


Any normal person, I told myself, would just pick it up and carry it outside. But I'm not a normal person. I'm the product of a childhood of indoctrination (by a mother determined to keep her animal-loving offspring alive in a land where almost all snakes are lethal). As a concession, I put aside my poster tube and gently shoved the little creature toward the open door with the broom. It writhed about with weird jerky movements, its head flicking sideways, so rapidly and frequently, it looked as if it had some awful nervous palsy. I'd never seen any snake behave like this.

After I'd persuaded it out the door (and had released the jostling pets), I sat down to identify it.

Oh. It wasn't harmless after all.

In fact, it was quite extraordinary.

It was a Bibron's (or southern) burrowing asp and - I was startled to learn - it and its kin (other burrowing asps) have the longest fangs, relative to skull size, of any venomous snake.
Their huge venom glands (which extend for up to 20% of their bodies) churn out a highly toxic brew that zaps your heart and blood pressure, and induces arterial spasms (now there's a symptom you don't see every day). North African species regularly kill people, but the bite of my common, under-the-table variety just leads to pain, severe swelling, blistering, necrosis, nausea, dryness of the throat and vertigo. You can read, here, the stressful story of someone (sans snake phobia) who made the same mistake as me. But read it LATER, because the really interesting bit is still to come!

You see, what's fascinating is that the impressive fangs of these little snakes are designed for underground use. And you can't rise up and strike in the tight confines of a burrow. So how do they prepare dinner? They've opted for the method favoured by street thugs the world over: they sidle up beside their victim and, without so much as opening their mouths, stab them in the ribs.

Their long fangs, located in the front of their upper jaw, actually lie horizontally in the mouth, pointing back toward the corner of their lips. To make room for this weird arrangement, they've had to sacrifice virtually all their other choppers (making swallowing food a pain - well, actually, a series of wriggles – in the neck). Their fangs have a hollow central tube (like a hypodermic syringe) and the tips are keeled for slicing flesh (all the better to get the venom in). When they want to stab a victim, they only have to shift their jaw a bit to one side, so a fang protrudes from their lips, and then jerk their heads down and sideways: POW!
So when my little house guest appeared to be suffering dreadful trembling palsies, it was actually biting the Hell out of the fluffy nylon bristles of the broom. Just shows, you never can tell.

These snakes are particularly problematic because you can't hold them safely behind the head; they just stab you out of the corner of their mouths. You can see a photo of one stabbing a baby mouse here. The Bibron's burrowing asp is also unusual because it has a sharp spine sticking out of the end of its tail (actually a continuation of its... well, spine). Browsing herpetological websites (oh, the shame), it seems that this anatomical feature further complicates things because care-givers of captive beasts (the species is popular for venom studies) often can't be sure whether they've been spiked by a tail or a tooth!