The month of yes you May

Tra la! It's May!
The lusty month of May!
That lovely month when ev'ryone goes
Blissfully astray.

It's here, it's here!
That shocking time of year
When tons of wicked little thoughts
Merrily appear!

It's May! Camelot, the musical.

﻿
Now I appreciate that the Arthurian legend originated in the UK, and that Camelot, however mythical, was never situated in the southern hemisphere.
So the above song must refer to the delights of spring.
Nevertheless, it's entirely appropriate to what's going on here right now.

Outside, my neighbours are rushing around in a frenzy of lust.
The air is reverberating with the bellows of macho guys proclaiming their supremacy, and furtive couples peep from behind every bush.

And don't imagine that I've escaped unscathed.
Every day I'm meeting tall, dark strangers who threaten to sweep me off my feet (and trample me under foot hoof too, but I guess you can't have everything).

It's all very hectic. Pumped up on a seasonal high of testosterone, the kudus and waterbucks are strutting around like body-builders with a severe case of mumps, and the wildebeests are actually frothing at the mouth. OK, I don't blame the wildebeests. Around here the species doesn't migrate, so the males have been sitting about alone - minding their territories - for the last eleven months. It's understandable that they're a wee bit excited now. They've got just three weeks to get a bit of the action.
﻿﻿


The territories of male wildebeests are absurdly small (around 1 ha/2.5 acres) but, despite this intensive living, fewer than half of the adults manage to bag a suitable domicile. You see any old bachelor pad won't do; it must be a chick-magnet. And when the girls do come wandering through, all Hell breaks loose. The resident bull dances out to meet them, showing off his best rocking canter and calling feverishly (pinch your nose and say 'G-NU' in a deep voice).

For as long as there are ladies visiting, he hasn't time to eat or rest. And all those civilised rituals - of head-shaking, kneeling and ground-horning - that he's been exchanging with neighbours for months, are forgotten. Any male fool enough to poke his nose in, simply gets head-slammed.

When lady guests are present, a male dashes about herding them away from the neighbours and blatantly checking out the talent. With nose and tail outstretched, he sniffs butt, and the girls oblige by dribbling a little tell-tale urine for him to taste. (Yes, it does make his lip curl, but this wafts the pee into his vomeronasal organ for chemical analysis, and does not signify impoliteness or any disrespect for the fairer smaller sex).

When in heat, female wildebeests are usually ready and willing, but if some little floozy starts giving him the run around, he reminds her of what she's missing by rearing up in front of her with a full erection!


Of course, in the heat of the moment, it's easy for an excited Romeo, wildly pursuing a coy lady friend, to fail to notice a researcher sitting quietly, surrounded by small, busy mongooses.
So far, no one has actually made hoof contact, but there have been some pretty near misses. And the way I've been feeling lately (after losing two of my three cats to Feline Leukaemia Virus), I'm tempted to fling myself down before them, crying, 'Bring on the hooves!'

But I guess trampling isn't likely to be fatal.

But much more annoying than amorous wildebeests (everyone loves a lover, after all) are the male waterbucks. These large shaggy antelopes also hold down territories year round, but they're more up-market in their choice of real estate. As suggested by the name, waterbucks must drink daily (slurping up 25% more water even than cattle) so snagging property with water-frontage is a real boon. However, prices are exorbitant and battles fierce.

So for me, driving home (on a track that follows the river) is like blundering into a film shoot of Gladiator. The horse-sized warriors stand broadside on the road, necks arched, tails stuck out and eyes locked. Without warning, they leap toward one another, thrusting and parrying, but without making contact. Eventually someone breaches the gap, slamming into their opponent with a terrifying crash, and the pair staggers back and forth, horns locked together in a battle of might.
﻿

But unlike sparring impalas or love-smitten wildebeests, battling waterbucks let NOTHING distract them. A car? So what.
One evening, as my dogs and I sat in the car waiting (as usual) for two huge males to sidle aggressively back and forth across the road, Magic leapt out of the window. Yapping hysterically, she raced over to lunge and snap at the combatants' fetlocks.

I stopped breathing, envisioning my beloved dog impaled on a 2m (6ft 5") long lance. But I needn't have worried; the champions totally ignored her. Not even a glance.

After a few minutes of valiant effort, she trotted forlornly back to the car, looking as if all joy had gone from the world. Wizard, who's long harboured a mistrust of waterbucks, watched this silently from the security of the vehicle, and then gave me such a look of 'I told you so' that he might as well have uttered the words.

Posted by mainly mongoose (Lynda) at 1:31 PM 3 comments: Links to this post

So you think you know why animals play... 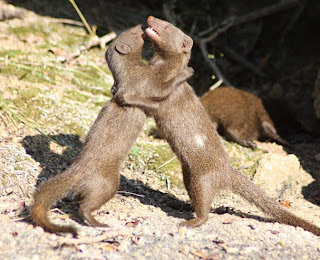 For this post I need to redirect you to Scientific American's guest blogs.

Don't worry, it's no more scientific than usual (hope they don't mind!).

Posted by mainly mongoose (Lynda) at 7:03 PM 13 comments: Links to this post