No, it wasn’t a day of wild celebration for stone-skimming enthusiasts, nor a day of reckoning for designers of rockeries.

On this auspicious day stout-hearted folk from around the globe head out into the wilds to turn over boulders and see what weird and wonderful critters are loitering underneath.

Now each time the event rolls around I’m faced with a quandary. I like the idea of all this collective rock-flipping but quail at the prospect of actually shoving my fingers into the murky haunts of venom-toting beasts.
OK, you may think I’m being overcautious, but the rocks around here harbour 3m (9.5 ft) long black mambas, bad-tempered puff adders and at least two species of cobra (one of whom spits venom with llama-like gusto). It’s a constant fight to keep these creatures out of my home without voluntarily invading theirs!

In the past I’ve deviously circumvented this dilemma (see here and here), but this year my ingenuity failed me and I decided to give Rock Flipping Day a miss. So averting my eyes from all rocks, and trying to ignore the skinks and flat lizards skittering about on every outcrop, I set off to find my mongooses. After one and half hours trudging through the heat, scouring the length and breadth of Koppiekats’ range, I finally found the group sprawled in the shade right beside my car.

And they were lying under rocks.
Hmm...

Although I only had my old point-and-shoot camera with me, I dutifully lay in the dirt on my stomach and tried to take some (bad) under-rock photos.


﻿
﻿
﻿
﻿
OK, I admit I didn’t flip anything. But I also didn’t die a slow and painful death by envenomation.
And I defy anyone to find something cuter under a rock.

To discover what the world's other (genuine) rock-flippers found beneath their rocks, check out Wanderin' Weeta blog. 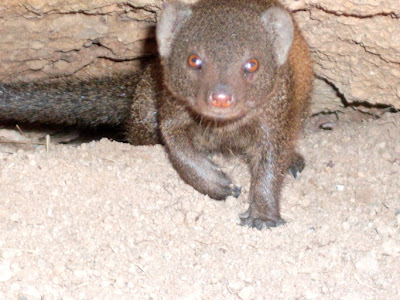