The reign of rain frogs


An unfortunate aspect of growing up is that we lose our early sense of wonder. We quickly learn to name things and pigeon-hole them, and take them for granted. The world loses its sparkle.

But now and again, we encounter something that defies our expectations, and encourages us to marvel again.
A few nights ago I came across just such a something creeping around my cats' food bowls. I don't know if a cat had put it there (contributing toward its upkeep?) or if it trundled in by itself, but I usually only see them after rain.

It was a frog. The moment you read that, a preconception forms in your mind. Frogs hop. Frogs hang out near water. And they start life swimming about as tadpoles.
Forget it! I'm talking rain frogs. 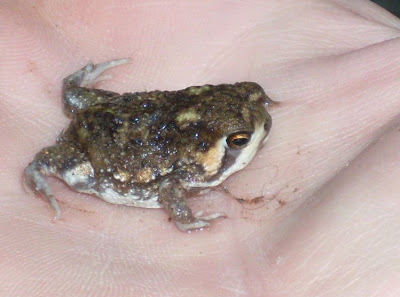 This bushveld rain frog (Breviceps adspersus) is about one inch long, but they can grow to an impressive two inches. There are 14 different species creeping about South Africa.
Rain frogs spend their lives in holes, and they're shaped to fit. Their stumpy little legs preclude even a hope of hopping (a sensible safety precaution in a burrow dweller). At night, rain frogs crouch at their burrow entrances, licking up any bug that wanders past. And when it rains, they'll even come creeping out – slowly and cryptically – to find their own true love. 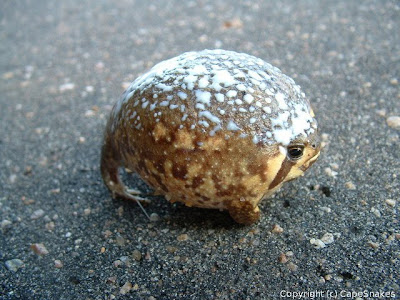 When agitated, rain frogs puff themselves up until they're almost spherical, and some species ooze a distasteful, milky fluid that deters potential diners. Photo by Jens Reissig and borrowed from here.
Being so portly and short-legged has its draw-backs; it makes reproduction tricky. Normally, a male frog mounts the female and clasps her in his arms (called amplexus) while he fertilises the eggs she's laying. But with rain frogs it's the ole 'corgi-mating-with-a-collie' problem. So how does the male manage? Fortunately, female rain frogs have it sorted. The skin on their backs secretes an adhesive, so the male only has to scrabble into position once, and he's set. Literally. The bond between them is so tenacious that you can't pull them apart without tearing the male's skin. Only after the pair has dug a burrow together, and the female has laid her 20-40 eggs inside, does her skin secrete a solvent that releases the male. Pretty nifty, huh? 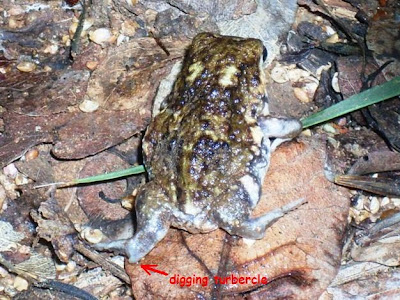 Rain fogs dig their burrows while in reverse. They back into the hole-to-be, slowly revolving, and scratch out the soil with a special horny 'tubercle' on the heels of their hind feet.
Along with their other bizarre characteristics, rain frogs have given up on the whole idea of tadpoles. Their eggs consist of a large whitish yolk coated in thick jelly-like goo. The little rain frogs grow up within the safety of the burrow, sustained entirely by their egg yolk and bathed in fluid from the melting jelly. Only when they're fully metamorphosed frogs, do they creep out to face the world. 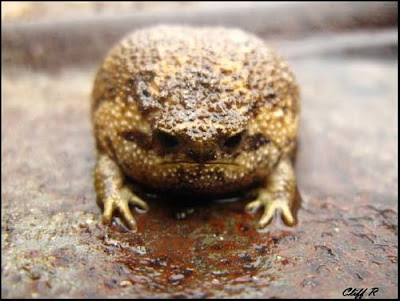 A bad day? This cape rain frog (Breviceps gibbosus) isn't feeling grouchy (actually I can't vouch for that). Its flattened face and forward facing eyes give it close-up, stereoscopic vision; all the better for nabbing small bugs. Photo borrowed from here.
Posted by mainly mongoose (Lynda) at 9:05 PM