Nature bloggers from around the world are out there vigorously overturning boulders and stones, and recording all the grisly details of what's underneath.

Unfortunately, my intention to take part in this global event began to waiver as the big day approached. A little nagging voice kept whispering, 'Don't you encounter enough life-threatening beasties without going looking for them?'
My resolve was further eroded by today's cool, blustery weather – perfect for cobras, mambas and puff adders to be hiding snugly in subterranean crevices.

Maybe if I flipped only little rocks...

Of course, there were still the scorpions. But only two of the thirteen species that live around here are actually lethal to adults... If only I didn't have to stick my fingers under the to-be-flipped rock before I knew what was underneath!

Then this rock saved the day. 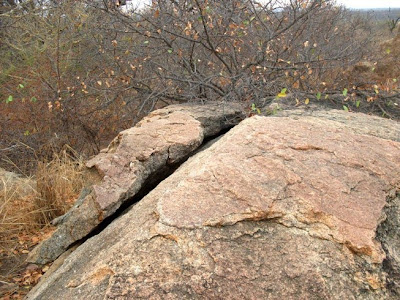 Alright, I admit I didn't flip it.
Herculean strength (like courage) is not one of my blessings.
To be totally honest, I wasn't even thinking about flipping rocks; I was crawling about in search of a trace of Koppiekats. As I peered into this crevice, diligently hunting for mongoose poop, I was startled to see an eye.

Can you see it? 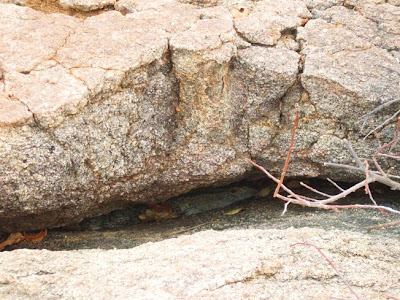 Of course, the eye was equally startled to see me.
We gazed at each other for a bit, before I dashed to the car for my camera. I was jubilant. After all, I'd definitely found this creature under a rock - so it must qualify - yet I'd managed to evade 'death-by-venomous-beast'.

Appropriately, my saviour was a rock monitor (Varanus exanthematicus). 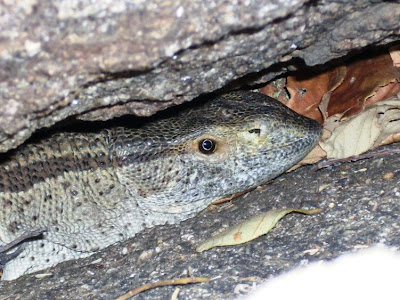 These heavy, thickset lizards grow to more than a metre (3 - 4 ft) and like to loiter in rock crevices, disused mammal burrows or hollow trees. This one was pressed as far back into its crevice as its bulk would allow. It had even folded its stumpy forelegs back along the side of its body for a better fit. Of course, you can't blame it for shyness; I wouldn't be forthcoming either if my scientific name meant 'skin eruptions' in Greek.


Of the 30 species of monitor that stalk the earth, only three live in Africa, and only two hang out here. I could see this one wasn't a Nile monitor (V. niloticus) because of its stubby, bulbous snout, and the weird placement of its nostrils (nearer its eyes than nose tip). Monitors (called leguaans in South Africa) have long forked tongues that they flick in and out as a snake does. Unlike most lizards, their tongues have no taste-buds, and are designed solely to pick up molecules and insert them - for chemical analysis - into the double opening of the vomeronasal organ on the roof of the mouth. However my prone monitor was clearly playing the cryptic card and appeared to be concentrating very hard on flicking nothing (maybe I just smell appalling).

If this one was female, she'll bury her 10 to 40 eggs (soft-shelled and the size of small hens' eggs) in a deep pit dug in the rain-softened soil. Although the eggs take four months to hatch in captivity, out here it's usually twelve. Why? Well there's no point in leaving your egg if the soil above you is rock hard because of the dry season. Does this mean - that at this very moment - there are hundreds of little monitor lizards sitting inside their eggs, drumming their toes and waiting for the rain? Well I never.

Although rock monitors mostly dine on millipedes, beetles and land snails, they're also very fond of carrion and any animal small enough to scoff down (including mongoose pups). Do you recognise the crevice in the photo below? Yep, it's the same one; only here it's sheltering a little Koppiekat pup. 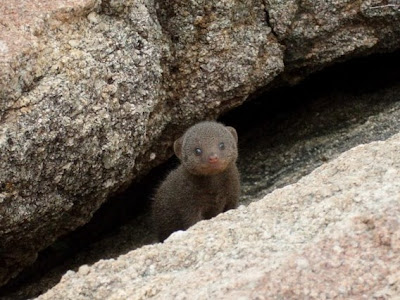 To discover what other exciting creatures the world's (much braver) rock-flippers have found, visit the compilation at Wanderin Weeta.
Posted by mainly mongoose (Lynda) at 1:55 PM